(JUN. 25) — Five 2018 National Artists from UP Diliman (UPD) were hailed as “Mga Bulwagan ng Dangal” in this year’s “Seremonya ng Pagbubukas” on Jun. 21 at the University Theater. The ceremony is the opening event of Linggo ng Parangal 2019. 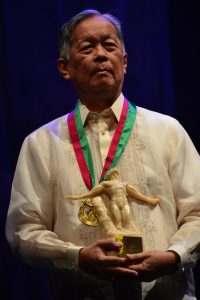 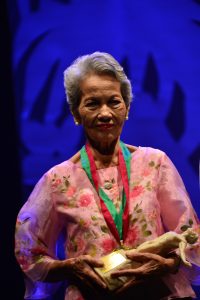 This year’s theme, “Bulwagan ng dangal” is a line from the University hymn “UP Naming Mahal” referring to UP as “an open hall with a wide and deep space which receives and gives, a hall where people can ponder and contemplate on their purpose in life, and a channel of service to the people.”

In the message of UP President Danilo L. Concepcion read by UP Vice President for Academic Affairs Maria Cynthia Rose B. Bautista, he said “contemplating, or being silent, is not a sign of weakness because this is a great quality of the mind that needs courage, patience and humility.”

In his message, UPD Chancellor Michael L. Tan shared his brief encounter with Kidlat Tahimik before the ceremony began. “Kidlat Tahimik said he invited young people from Cordillera so they could see how a crazy man is honored. It is good that we are all here to witness a crazy man being awarded by a crazy university,” he said. 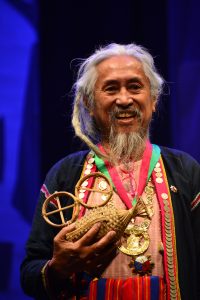 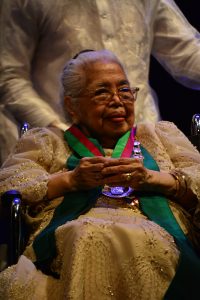 In the next segment, Alcala’s comic strip “Congressman Kalog” was re-enacted by Paulo O’Hara as Cong. Kalog, Olive Nieto (Kalog’s wife) and Norbs Portales (Kalog’s friend). Interposed with the re-enactment was a dance performance by the UP Dance Company. UP College of Fine Arts Dean Mitzi Marie Aguilar-Reyes read the citation. Alcala’s wife Guadalupe received the recognition on his behalf. Alcala was given the National Artist title posthumously.

Next was a screening of scenes from Kidlat Tahimik’s film “Why is Yellow the Middle of the Rainbow?” In between the screening was an Igorot dance by Roger Federico, Lee Law Ed (instrumentalist) and Gaven Earl Federico Salinas (child Kidlat). UP Film Institute Prof. Nick Deocampo read the citation. Kidlat Tahimik and wife Katrin de Guia received his recognition. 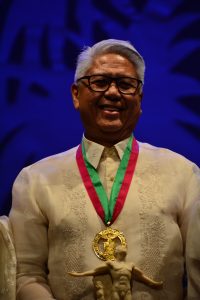 Mojares earned his PhD Literature in 1979, Alcala his BFA Painting in 1950, Kidlat Tahimik his BA Speech and Drama in 1963, Lapeña-Bonifacio her BA English in 1953, and Cayabyab his Bachelor of Music, major in Theory in 1983.