(MAR. 6) – A film on the struggling sugar industry of Negros island and a film narrating the life of a Lumad couple after being captured and tortured by the military opened “Tahan(an): Pista Pelikula 2019” on Mar. 1 at the Cine Adarna of the UP Film Institute Film Center. 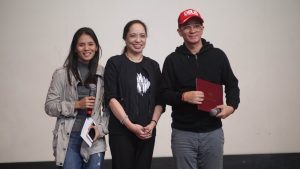 The 3-day film festival is part of the UP Diliman (UPD) Arts and Culture Month 2019 “Lakad-Gunita sa Lupang Hinirang” and features five films centered on the themes of “displacement and emplacement” in its various contexts. It was organized by the UPD Office for Initiatives in Culture and the Arts (OICA) in cooperation with the College of Mass Communication.

The opening day showcased the films “Pureza: The Story of Negros Sugar” by Jay Abello (4 p.m.) and “Tu Pug Imatuy” by Arnel Barbarona (7 p.m.). An artist talk followed each screening.

“Pureza” (2012) is a full-length documentary film narrating the struggling sugar industry of Negros island and how this crystallized grain could affect the lives of 2.7 million people. The film was nominated for Best Documentary in the Gawad Urian 2013. 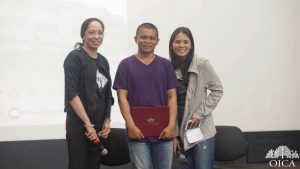 “Tu Pug Imatuy” (2017), or “the right to kill” in Manobo, chronicled the life of Lumad couple Obunay and Dawin after being captured by the military and forced to help in pointing out the rebels’ hideouts in their area. The film received nominations and awards like Best Picture and Best Director from Gawad Urian 2018, FAMAS Awards 2018 and Sinag Maynila Film Festival 2017.

On Mar. 8, two films by Jewel Maranan will be featured. “Tundong Magiliw: Pasaan Isinisilang Siyang Mahirap?” (2011) at 4 p.m. and “Sa Palad ng Dantaong Kulang” (2017) at 7 p.m. are documentaries on the struggles of poor families living in Manila’s North Harbor, and how they deal with their daily perils of hunger and violence. An artist talk will follow after each screening.

Marilou Diaz-Abaya’s award-winning film “Moral” (1982) will be screened on Mar. 15 at 4 p.m. The film is about classmates and best friends Joey, Kathy, Sylvia and Maritess. The film traces the lives of the four women through their seemingly desperate but also interwoven experiences.

The film screenings are for free but with control tickets that can be availed through OICA or at the venue before each screening. – By Benito V. Sanvictores Jr., photos courtesy of OICA.