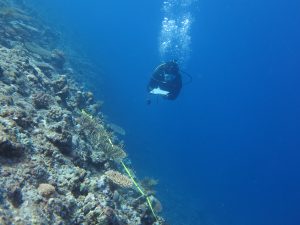 (OCT. 15)—The UP Marine Science Institute (UPMSI) through its Director, Prof. Laura T. David, PhD, accepted the apology of Benny D. Antiporda, Spokesperson and Department of Environment and Natural Resources (DENR) Undersecretary for Solid Waste Management and Local Government Units Concerns over comments he made about UP, particularly UPMSI, over the issue of the Manila Bay rehabilitation project.

He made the apology during an Oct. 15 interview with the ABS-CBN News Channelprogram “Headstart.”

Antiporda said he did not intend to “destroy the good name of the University, but this is just to send a message to UPMSI that we’re partners here….[if] along the way may nakita po kayong mali sa amin, what we’re expecting is for you to call us or even text us or even write a letter to the Secretary telling us kung ano yung pwede naming gawin.”

“Headstart” host Karen Davila asked David whether the UPMSI was consulted when it came to using crushed dolomite for the Manila Bay project. David said to her knowledge, “not MSI and not any other institute in UPD.”

David called the whole thing an issue of misunderstanding and miscommunication.  She emphasized that the important thing now is for communication to continue and to honor the decades of work with DENR and hopes “to continue to do the same for years to come.”

Meanwhile, UP Diliman Chancellor Fidel R. Nemenzo, said that “While we acknowledge DENR Undersecretary Antiporda’s recent apology for his irresponsible statements, we take this opportunity to stress upon the public the role of UP’s scientists, researchers, and professors in addressing problems in society and rebuilding our country.”

Nemenzo explained that “the statements issued by our scientists on the Manila Bay rehabilitation project are part of our moral responsibility to offer a scientific perspective on a public issue that clearly affects the environment. In doing so, we fulfill an essential part of UP’s public service function to serve as the National University.”

On Sept. 30, the UPMSI issued a statement on the use of crushed dolomite for the Manila Bay project, maintaining that it will be expensive as the sands will eventually be eroded by the sea and regular weather.  The UPMSI statement also pointed that the use of dolomite will not solve the acidification of Manila Bay’s waters and prolonged exposure to the finer dolomite particles may cause health problems.

The Manila Bay rehabilitation project cost a total of P389 million, of which P28 million was spent procuring the dolomite sand.

Reacting to the DENR Undersecretary’s “bayaran kayo” remark, Nemenzo said that “many of the country’s most educated and best-trained citizens choose to work in UP, with salaries much lower than what they could earn in the private sector or abroad, because they take seriously their pledge to serve the people.”

He added that “we will continue to uphold the public function of the University by providing research and extension to the government and the public. Our experts in all fields — the social sciences, the arts and the sciences — are always available for consultation and partnership with government agencies, coming from mutual respect for each other’s expertise and an understanding of each other’s role in policy and decision making.”

During an Oct. 14 “Laging Handa” press briefing, Antiporda was quoted as saying UP experts had no right to criticize the Manila Bay project.

At the same briefing, Antiporda called on the Commission on Audit to investigate the half a billion the DENR allegedly paid in consultation fees starting in 2016.

The UPMSI clarified the statement, saying that “the correct amount is P364,073,909.40 total for the last decade, spanning 10 collaborative projects between the UPMSI and the DENR as well as co-sponsorship support for a scientific symposium.  This is hardly the half a billion the Undersecretary has been claiming.”

The Institute further said, “This amount covered the cost of scientific research and investigation, from the use of laboratories and research equipment and facilities to field work and support to research assistants. The funds also supported capacity-building of national government agencies and Higher Education Institutions personnel.”

In an Oct. 15 email to UP Diliman Information Office, David said “UP and UPMSI has had a long-standing cooperation with the DENR.  We welcome the opportunity to continue this relationship and collaborate with them and other national government agencies, private institutions and the public.”

David concluded with a call to her fellow Filipinos to “do our part to protect our environment so that we may safeguard the long-term security of our nation.”