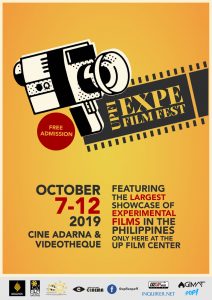 Here’s the much-awaited UPFI EXPE FILM FEST Program featuring the schedule of film screenings and the list of filmmakers. Opening on October 7, 2019, Monday at 2 PM with a lecture on “The History of Philippine Experimental Cinema” followed by a panel composed of Prof. Ingo Petzke, Prof. Nick Deocampo and Teddy Co. The first day also highlights the World Premiere of digital works coming from the recently held Experimental Film Workshop and also the classic landmarks of Filipino-German Experimental Films. Free admission.

Films featured in this year’s edition of the festival are those produced until 1999 with very few exceptions. Digital works will be shown next year.