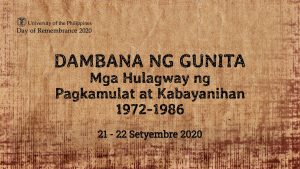 On 21 September 1972, then President Ferdinand Marcos signed Proclamation No. 1081, placing the Philippines under Martial Law. This marked the beginning of a period of authoritarian rule that ravaged the nation’s democracy and economy, and saw a record number of human rights violations, such as extrajudicial killings and disappearances. Fourteen years later, the Filipino people succeeded in ousting the dictator with the words “Sobra Na, Tama Na! Oust Marcos! Lansagin ang diktadura!” as their battle cry.

Now, 48 years after Marcos’ declaration of Martial Law, we once again revisit this dark period in our country’s history and honor the heroes who fought, struggled and gave their lives for the cause of freedom and justice, even as many of the same dark forces continue to plague our society today. Even as we face the seismic impact of the COVID-19 pandemic, we refresh our memory of the evils of dictatorship and renew our struggle with the battle cry, “Never again, never forget!”

From September 21 to 22, the University of the Philippines System will hold its UP Day of Remembrance 2020, a virtual commemoration of the University’s collective memories of the events leading to and following the declaration of Martial Law from the 1970s to the mid-1980s.

This year’s UP Day of Remembrance, titled “Dambana ng Gunita: Mga Hulagway ng Pagkamulat at Kabayanihan 1972-1986”, consists of two main activities: four webinars featuring UP alumni and faculty who fought during Martial Law sharing their experiences; and, an online exhibit to feature Martial Law narratives of resistance and hope that continue to resonate up to now.

These online activities will be held across all eight UP constituent units, and will revolve around four themes: Hamon ng Batas Militar, focusing on the early years of clampdown on civil liberties and adapting to the situation with new forms of struggle; Detenido, Desparecido, a remembrance of the Marcos regime’s violation of human rights and cruelty through disregard of due process, indefinite imprisonment, torture, disappearances and killings; Sining at Panitik: Daluyan ng Tinig, recalling writers and artists who created new forms of expression, inspiring and mobilizing the masses for action against deception; and, Patungong People Power: Turning Points, on the events in the 1980s that became turning points which led to the end of the Marcos dictatorship.

In pursuit of its tradition of struggle for academic freedom and democratic ideals, UP stood at the forefront of the resistance to Martial Law and the Marcos regime, contributing to this struggle many of its best and brightest. Now UP deems it proper to enshrine their names and struggles for younger and future generations of the University to emulate. It is for this reason that UP President Danilo L. Concepcion signed Proclamation No. 1 in 2018 declaring September 21 of every year as UP Day of Remembrance during which special lectures, meetings and ceremonies will be held across the UP System to commemorate UP’s participation and sacrifices in the struggle against dictatorship and tyranny.

The UP Day of Remembrance 2020 is made all the more significant as the University commemorated in February this year the 50th anniversary of the First Quarter Storm, which led to the Diliman Commune and other watershed events prior to the declaration of Martial Law.

The UP Day of Remembrance 2020 is open to all teachers, educators, scholars and Filipinos who wish to continue learning about our country’s history and who believe in the importance of upholding and defending basic freedoms, civil liberties and human rights.

Livestream of the webinars and the online exhibit will be available via TVUP.ph and TVUP’ YouTube channel. 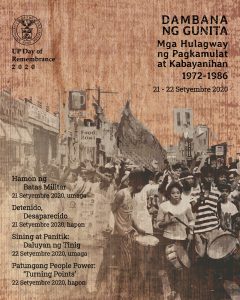 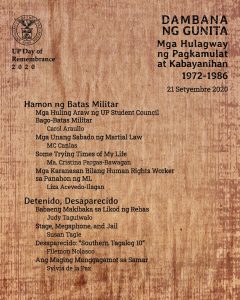 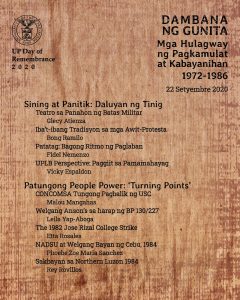