UP School of Economics 51st Homecoming : UP STREET BEATS 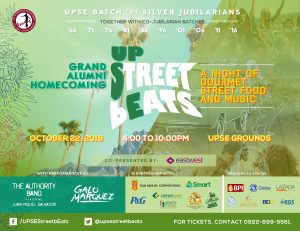 The University of the Philippines School of Economics (UPSE) will be holding its grand alumni homecoming on October 22, Saturday from 4pm to 10 pm, at the School grounds in the UP Diliman campus.

The UPSE is the country’s premiere institution for teaching and research in the field of economics, upholding values of honor and excellence of the University of the Philippines. Over the past 51 years, alumni of the UPSE have contributed to the growth of the Philippine economy through service and participation in government and industry. Esteemed alumni and faculty have served in the highest levels of the Philippine government, in multilateral economic agencies, and have achieved exceptional success in industry.

During the homecoming, the UPSE community celebrates its vibrant role in nation building as it acknowledges its members who have dedicated their careers to public service, led by Vice President Maria Leonor “Leni” Robredo (Batch ‘86), cabinet secretaries Secretary Ernesto Pernia  of the National Economic Development Authority (NEDA), Secretary Benjamin Diokno (Batch ‘72) of the Department of Budget Management (DBM), Secretary Ramon Lopez (Batch ‘81) of the Department of Trade and Industry (DTI), and Chairman Arsenio M. Balisacan (Dean, 2010-12) of the Philippine Competition Commission (PCC).

There will be live performances by Juan Miguel Salvador of the Authority Band and DJ Galo Marquez.