UP Gawad Plaridel 2017 Awarding and Lecture 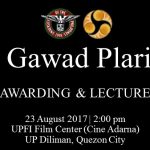 The U.P. Gawad Plaridel is the sole award in the University of the Philippines given to outstanding Filipino media practitioners who have excelled in media (print, film, radio, television, and new media) and have performed with the highest level of professional integrity in the interest of public service. The recognition is given to one practitioner in one medium for each year.

This year’s U.P. Gawad Plaridel recipient is Ms. Ma. Cristina “Tina” Monzon Palma, a veteran broadcaster who is cited for her pioneering efforts that opened doors/opportunities for women at a time when men dominated the media landscape. Palma has kept her professional integrity in her more than 40 years in the media. She was a news anchor during the Martial Law years, and remained steadfast in her craft.

The U.P. Gawad Plaridel comes with a trophy designed by National Artist Napoleon Abueva, which will be presented by the U.P. President Danilo Concepcion and U.P. Diliman Chancellor Michael Tan in the awarding ceremonies. Palma will also deliver a lecture which addresses important media issues in the country.

The event is open to the public and will be live streamed through the UP DILC website. Please visit the UP College of Mass Communication website (http://masscomm.upd.edu.ph) and Facebook page (https://www.facebook.com/UPCMC) for further announcements/updates. You may also email us at upgawadplaridel@gmail.com for inquiries.