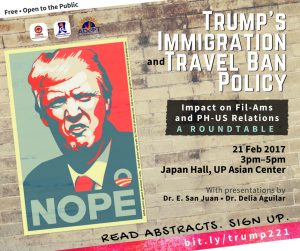 The Center for People Empowerment in Governance (CENPEG) and the Asia for Development and Peace Today (ADePT), in cooperation with the UP Asian Center, will be holding a roundtable, “Trump’s Immigration and Travel Ban Policy: Impact on Fil-Ams and Philippines-US Relations” on Tuesday, 21 February 2017, 3:00 pm to 5:00 pm

, Japan Hall, Hall of Wisdom, UP Asian Center, Diliman, Quezon City. The roundtable is free and open to the public; seating is first-come, first-served, but participants are requested to register online.

The roundtable will also include talks by Dr. E. San Juan and Dr. Delia Aguilar. Professor San Juan features “reflections on Pres. Trump’s ban on selected immigrants and its possible effects on Filipinos in the United States, and looks at the issue from a historical perspective. [For Dr. San Juan,] US immigration policy may be read as a symptom of the crisis in the project of sustaining U.S. hegemony amid sharpening internal class divisions in a world wracked with rivalry among imperial powers.

Dr. Aguilar, meanwhile, notes that “the whole world witnessed the massive show of women and their supporters marching in Washington following Trump’s inauguration in January. Since then there has been no let-up of actions protesting Trump’s draconian policies all throughout the country.” She will “discuss the significance of such actions and what these might mean for building a progressive movement in the United States.”

Dr. E. San Juan is Professorial Lecturer in Cultural Studies, Polytechnic University of the Philippines,, and emeritus professor of English, Comparative Literature, and Ethnic Studies, Washington State University and the University of Connecticut.  He was recently fellow of the W.E.B. Du Bois Institute, Harvard University; and of the Harry Ransom Center, University of Texas. He was 2003 professor of American Studies at Katholieke Universiteit Leuven in Belgium. His recent books include Racism and Cultural Studies; Working Through Contradictions; Between Empire and Insurgency; Learning from the Filipino Diaspora; Filipinas Everywhere; and Lupang Hinirang, Lupang Tinubuan.  Dr. San Juan is also a poet, with a collection of his poems, written in the last four decades, published as Alay sa Paglikha ng Bukangliwayway.

Dr. Delia Aguilar is noted for her work in interdisciplinary studies, particularly women’s and Asian studies. Her recent work includes working as the Visiting Jane Watson Irwin Chair in Women’s Studies, Hamilton College. 2008-2009. Currently, she works as a lecturer in the Women’s Studies program at the University of Connecticut. Dr. Aguilar received her PhD in Women’s Studies from The Union Institute in 1987. She is the editor of Women and Globalization (along with Anne Lacsamana) and author of Filipino Housewives Speak; Toward a Nationalist Feminism; The Feminist Challenge: Initial Working Principles toward Re-conceptualizing the Feminist Movement in the Philippines.

The roundtable is organized by the Center for People Empowerment in Governance; the Asia for Development and Peace Today (ADePT); and the UP Asian Center.

For directions, please view this vicinity map and a Google Street View map. Inquiries may be sent to cenpeg.info@gmail.com.