Transpacific Insights on the Meiji Restoration and Japanese Culture: The American Thirst for Green Tea 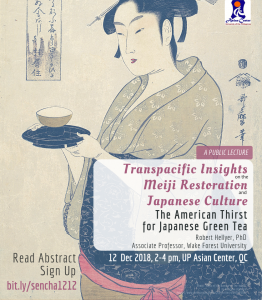 The UP Asian Center will be holding a lecture, “Transpacific Insights on the Meiji Restoration and Japanese Culture: The American Thirst for Japanese Green Tea,” on 12 December 2018, Wednesday, from 2–4 p.m. at the UP Asian Center. The lecture is free and open to the public. Walk-ins are welcome, but interested participants are encouraged to sign up.

Soon after the Meiji Restoration in 1868, Japan dramatically expanded tea production—especially of high-quality sencha—specifically to meet demand from the United States (US), then a green tea-consuming nation. This presentation will explain how that production helped ease social tensions in the nascent Meiji nation-state by providing employment for Tokugawa retainers who had opposed the new central regime during the Boshin War (1868–1869).

It will also detail how a change in American tastes—the embrace of black tea produced in South Asia in the 1920s —brought a decline in Japanese tea exports to the US.  Facing a glut, Japanese tea merchants aggressively marketed sencha locally for the first time, emphasizing its health benefits. As a result, many Japanese came to consume sencha daily, a trend that continues today.

ABOUT THE BOSHIN WAR

The Boshin War refers to the conflict between the forces of the Tokugawa Shogunate and their enemies.

Dr. Robert Hellyer is an Associate Professor of History at the Wake Forest University. His research interests include Japan’s foreign relations during the Edo period and the socio-economic integration of the Pacific during the eighteenth and nineteenth centuries. His current research explores Japan’s export of green tea to the US from 1850 to 1950.