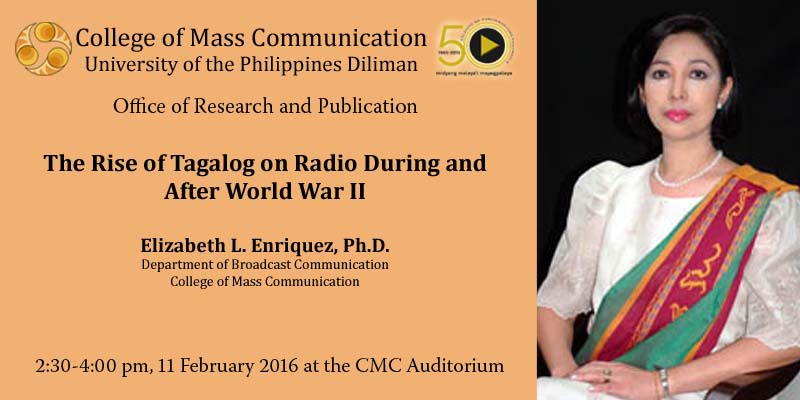 The Rise of Tagalog on Radio During and After World War II
by Elizabeth L. Enriquez, Ph.D., Department of Broadcast Communication

Tagalog supplanted English as the dominant language on radio during World War II.  This was partly the result of the Japanese cultural policy that proclaimed Nihongo and Tagalog as official languages of the Philippines while suppressing but not totally eliminating English on the air.  No less than the acclaimed Ama ng Pambansang Wika at Balarila (Father of Philippine National Language and Grammar) Lope K. Santos, as director of the Kawanihan ng Wikang Pambansa (Institute of National Language) during the war, designed Tagalog lessons on the air and promoted its use on the Japanese-controlled broadcast station.  After the war, while English returned as the principal language of broadcasting in the country, Tagalog maintained a growing presence.  Other Filipino languages also began to flourish on radio as broadcasting stations began to go on the air outside Manila, where audiences expected to hear programs in their own respective languages.  With the birth of the Philippine recording industry after the war, records of local talent singing traditional Filipino songs and more recent local compositions likewise intensified the presence of Tagalog on the air.