The ASEAN Drama: Half a Century and Still Unfolding 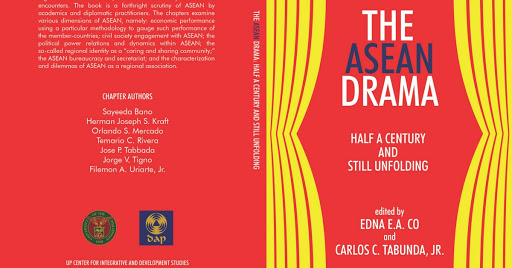 The UP Center for Integrative and Development Studies (CIDS), along with the UP Asian Center and the Development Academy of the Philippines (DAP), will host a public forum and book launch, The ASEAN Drama: Half a Century and Still Unfolding, on May 17, 2017, 2 pm to 5 pm at the GT-Toyota Asian Center Auditorium, UP Asian Center, Quezon City. The forum and launch is free and open to the public; but participants are encouraged to sign up.

ABOUT THE FORUM And BOOK LAUNCH

Ambassador Lauro Baja, Jr., former Philippine representative to the United Nations, will deliver the keynote speech, “ASEAN: The other side of midnight“. He will discuss the organization’s 50-year history, and will share his thoughts on the Philippine’s Chairmanship on ASEAN’s golden anniversary and what the future looks like for both the Philippines and the region.

During the forum/book launch, Dr. Edna Co, co-editor of The ASEAN Drama: Half a Century and Still Unfolding, will also give an overview of the book’s chapters and the significance of each, and will use the insights gleaned therefrom to reflect on the “way to go”, i.e., on ASEAN’s need for “a collective capacity to govern”, stronger leadership and coherence, and unity and interdependence among member countries, among others.

ABOUT THE KEYNOTE SPEAKER

Ambassador Lauro Baja, Jr. is one of the most senior and respected diplomats of the Philippines, who served the country in various diplomatic capacities for over 40 years, including Philippine Ambassador to Brazil and Italy, Assistant Secretary for Asian and Pacific Affairs, and as Senior Undersecretary for Foreign Affairs in charge of policy. He was Executive Director of the Office of United Nations and Other International Organizations in the Philippines from 1977 to 1979. During his term as Senior Undersecretary, Ambassador Baja oversaw many initiatives, including the establishment of the ASEAN plus three with China, Japan and Korea; the Trilateral Agreement among the Philippines, Indonesia and Malaysia on the Exchange of Information and Establishment of Communications Procedure to Combat Terrorism; and the 2002 Declaration on the Conduct of Parties in the South China Sea. He engineered the election of the Philippines to the UN Security Council, was chosen by President Arroyo to represent the Philippines in the United Nations, and oversee Manila’s participation as a non-permanent member of the Security Council. Ambassador Baja presided over the Council and shepherded the unanimous adoption of Security Council Resolution 1546, which established the political process in Iraq. He was elected chairman of the Sixth (Legal) Committee of the 58th UN General Assembly.

A “forthright scrutiny of ASEAN” by academics and diplomatic practitioners, The ASEAN Drama: Half a Century and Still Unfolding contains chapters on:

The ASEAN Drama: Half a Century and Still Unfolding reflects a diversity in thinking about ASEAN, its character, the issues the regional association faces, as well as the many dilemmas it encounters. It is co-edited by Dr. Edna Co, Executive Director of the UP Center for Integrative and Development Studies and Dr. Carlos Tabunda, Executive Fellow of the Development Academy of the Philippines.

Regular price of the book is PhP 400, but it will be available on the 17th at a limited launch price of PhP 350.

Vehicles entering the UP Asian Center (GT-Toyota Asian Cultural Center) grounds can only do so via the gate on Magsaysay Avenue that is near a UP guardhouse, a few meters away from Katipunan Avenue, and across Maynilad. A small gate for pedestrians on Guerrero St. lies across the College of Law parking lot and a few meters away from a waiting shed, where the Ikot jeepney, and jeepneys from Philcoa and SM North pass by. VIEW VICINITY MAP and GOOGLE STREET VIEW