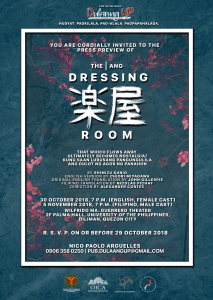 The play echoes the aftermath of World War II in Japan in an ironically witty and melancholic way. The story follows the lives of four actresses preparing backstage while waiting for their cue to enter onstage. These actresses take turns telling their stories, each expressing an obsessive desire to perform the lead role, which ignites a comic yet dramatic narrative about shared memories that reveal their aspirations and frustrations.

We hope to see you at the theater!