Special Lecture and Debriefing Seminar on Japanese Culture and Literature 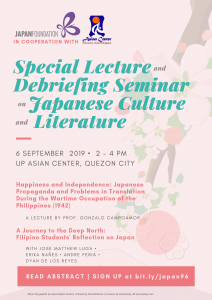 The UP Asian Center and the Japan Foundation Manila will be holding a public seminar, “Special Lecture and Debriefing Seminar on Japanese Culture and Literature,” at the UP Asian Center, Quezon City, 6 September 2019, 2 – 4 pm. The seminar is free and open to the public. Seating is first come, first served. Walk-ins are welcome but encouraged to sign up.

Happiness and Independence: Japanese Propaganda and Problems in Translation during the Wartime Occupation of the Philippines (1942)

Unlike its military component, Imperial Japanese propaganda arm at the beginning of the Pacific War, despite having been composed of the country’s best civilian writers and artists, was hugely underdeveloped if compared to its counterparts in other countries, as exemplified by Germany, Russia, and the United States. The paper explores some of the problems it encountered in 1942 colonial Philippines particularly in relation to the wide linguistic gap that involved several languages. Highlighting two key concepts, or sound-images as referred to by Saussure, utilized by Japanese propaganda, the paper attempts to historicize and analyze the complex political relations in wartime context through the seemingly minor arena of discourse.

This lecture will be delivered by Dr. Gonzalo Campoamor, Associate Professor at the Department of Filipino and Philippine Literature in UP Diliman.

A Journey to the Deep North: Reflections on Japan

Four students—Dyan de los Reyes, Erika Nañes, Andre Feria, and Matthew Luga— who went on a study tour of Japan in April 2019 will reflect on their visit.

The seminar and public lecture is co-organized with the Japan Foundation, Manila Office. For queries, please email asiancenter@up.edu.ph.