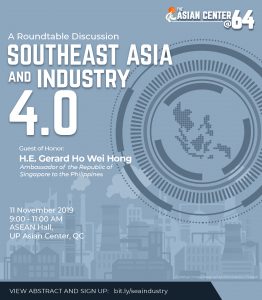 The UP Asian Center is organizing a roundtable, Southeast Asia and Industry 4.0, on 11 November, 9 am to 11 am, ASEAN Hall, UP Asian Center, QC. The roundtable is free and open to the public. Seating is first-come, first-served, but participants are encouraged to sign up.

H.E. Gerard Ho is Ambassador of Singapore to the Philippines. He joined the Ministry of Foreign Affairs in May 1997. He was Director-General of the ASEAN Directorate from January 2015 to February 2019, and served as Deputy Chief of Mission in the Embassy of Singapore in Jakarta from February 2010 to December 2014. He was First Secretary in the High Commission of Singapore in Kuala Lumpur from January 2004 to July 2007, and First Secretary in the Permanent Mission of Singapore to the United Nations in New York from April 2000 to August 2003. Ambassador Ho took up his post as Singapore’s Ambassador to the Republic of the Philippines on 18 March 2019. Ambassador Ho obtained a Bachelor of Arts in History from the National University of Singapore in 1997. He obtained a Master of Arts Degree from Columbia University, New York, in 2009. (Ministry of Foreign Affairs, Singapore)

This event is part of the Asian Center’s 64th anniversary celebrations. View full list activities and sign up.