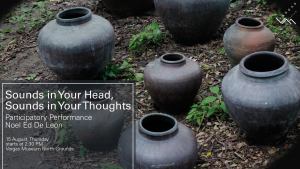 The UP Vargas Museum is inviting everyone to Noel Ed De Leon’s participatory performance titled Sounds in Your Head, Sounds in Your Thoughts on 15 August, Thursday at the Vargas Museum North Grounds, at 2:30pm. This is a collateral event as part of his on-going exhibition 1,976 Objects on view until 7 September 2019.

De Leon’s participatory performance involves the 187 large burnay jars project titled Circle Formation, Point of Orientation, Parallel Dislocation. Participants will be instructed to observe, touch, smell, listen to the burnay jars, then make their own sounds, which they will record. We ask those joining to bring any sound recorder.

The event is free and open to the public.

(In case of unfavorable weather, the performance will be held at the West Wing Porch.) 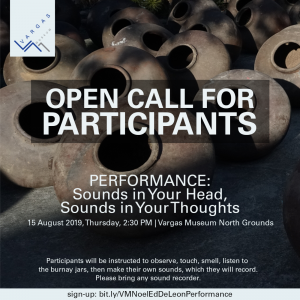