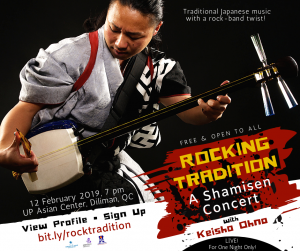 Discover traditional Japanese music with a rock-band twist at “Rocking Tradition: A Shamisen Concert with Keisho Ohno” on 12 February 2019, 7 PM, UP Asian Center, Quezon City. The performance is free and open to the public. Seating is first-come, first-served. Walk-ins are welcome, but attendees are encouraged to sign up.

Keisho Ohno was accredited as a master (natori) of the tsugaru shamisen at the early age of 12. He performed at the FIFA World Cup in Africa in 2010, and at the FIFA Women’s World Cup in Germany in 2011. That same year, Keisho was the “key performer” at the Japan Expo in Paris. His recent international performances were at the “Organization for Economic-cooperation and Development (OECD) Ministerial Board of Directors Meeting in Paris, participated by 34 developed countries,” in 2014 and at the Kuwaiti National Founding event in 2015.

In 2006, he became the first tsugaru shamisen player to perform at the South by Southwest, the world’s largest music fair held in the US. This was followed by a five-city tour in France and Luxemburg in 2008. Since then, he has “gained a steady artistic foothold” by performing yearly in European cities in Germany, France, Belgium and the Netherlands.

Keisho is known for always challenging “nouvelle performance and high musical technique.” His music, which combines the shamisen with rock tunes, is exemplified by his motto, “Keeping traditional music as well as destroying it.” He has released five albums in his career: Shamisen-damashii -Shami Spirits (2007); Samurai (2008); KAMOME (2011), which also debuted in Europe from a French label; SPARK (2013); and KEI (2013), which features traditional shamisen pieces. Visit his site.

The tsugaru shamisen is a traditional Japanese musical instrument with 3 strings. It originated from Tsugaru region in the Aomori prefecture. Of the three types of shamisen, the tsugaru shamisen is the biggest, characterized by its broad neck.1 It is played by plucking the strings very hard with a “straight wooden stick” called the bachi.2

The free concert is organized by the UP Asian Center, Japan Foundation Manila, and the Embassy of Japan in the Philippines.