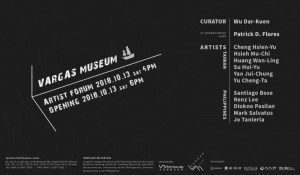 Exhibition Dates: October 13 to November 16, 2018
Artist Talk: October 13, 2018, Saturday at 4:00pm
Opening: October 13, 2018 at 6:00pm
Curator: Dar-Kuen Wu
In Collaboration With: Patrick D. Flores
Venue: Jorge B. Vargas Museum and Filipiniana Research Center
Address: Roxas Avenue, University of the Philippines Diliman, Quezon City, Philippines
Participating Artists: Jui-Chung Yao, Hui-Yu Su, Hsien-Yu Cheng, Cheng-Ta Yu, Wan-Ling Huang, Mu-Chi Hsieh, Santiago Bose, Diokno Pasilan, Mark Salvatus, Jo Tanierla, Renz Lee
VT Artsalon has been facilitating cultural exchanges between Taiwan and the globe for many years through exhibition, artist residency, forum and publication as a way to contemplate on Taiwan’s existence within the unique cultural and political context. In 2017, VT Artsalon proposed Project Island Hopping – Reversing Imperialism in the hope to provide a route to reflect upon and resist the imperial invasion that has begun since World War II and made use of the island chain. Through the project, “art as action” becomes a primary initiative to redefine the cultural context and artistic perspective of the Pacific island chain.
The project refers to the reversing route of the island hopping strategy adopted by the US army in World War II. The first exhibition of the project, Vessel, was curated by Patrick D. Flores, Curator of the Jorge B. Vargas Museum and Filipiniana Research Center, and took place at VT Artsalon in March, 2017. In October, 2018, Dar-Kuen Wu, Curator of VT Artsalon collaborated with Flores to curate Landerpresented at the Vargas Museum in Manila. The exchange exhibition of Taiwanese and Filipino contemporary art features six Taiwanese artists, including Jui-Chung Yao, Hui-Yu Su, Hsien-Yu Cheng, Cheng-Ta Yu, Wan-Ling Huang, Mu-Chi Hsieh, and five Filipino artists, who are Santiago Bose, Diokno Pasilan, Mark Salvatus, Jo Tanierla, and Renz Lee. The exhibition also represents a possibility to respond to current social collective anxiety in both the Taiwanese and Filipino contemporary art communities. Naturally, it is a response to the larger scheme of Project Island Hopping as well: an exploration of the relationship between invasion and being invaded, the global and the local, the active and the passive, as well as a latent Asian consciousness and position. Through the dialogue between these Taiwanese and Filipino artists, this exhibition is both a response to the exhibition, Vessel, as well as a revelation of the grand scheme of Project Island Hopping, which is to redefine historical and geographical regions and reconstruct an alternative topology and identity.

In addition to discuss the Filipino colonial past within the historical context presented through the artists’ works, the exhibition also actively engages in discussions and topics about post-modern globalization and digital mediatization that have emerged after post-colonialism as well as the surfacing of new populism. The Artist Talk of the exhibition will start at 4 pm on October 13. Through their dialogue, the Taiwanese and Filipino artists will take a retrospective look at the islands to exorcise the colonial specter of the past.