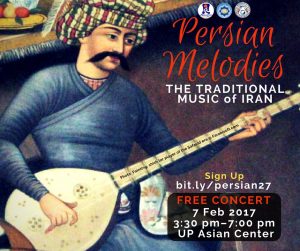 The UP Asian Center will be hosting a free concert, “Persian Melodies: The Traditional Music of Iran” on 7 February 2017, 3:30 p.m. to 7:00 p.m., GT-Toyota Asian Center Auditorium, UP Asian Center. The concert is open to the public, but seating is first-come, first-served.
SIGN UP: ONLINE REGISTRATION

The concert will feature performances of traditional Iranian music, which is generally performed by small groups that typically consist of a vocalist and (an) instrumentalist(s) for the rhythm and melody.

“We are happy to bring the venerable musical culture of Iran to UP,” says Dr. Henelito Sevilla of the UP Asian Center, who took his Ph.D. in International Relations at the University of Tehran. “This is a rare opportunity to discover a rich musical tradition from the Western side of Asia. The concert offers a great educational and cultural experience, helping Filipinos, especially musicians and music lovers, recognize the similarities and differences between Iranian and Philippine musical traditions.”

The vocalist of the group, Chavous, will sing traditional Persian melodies accompanied by several native instruments such as tar, setar, nay, dulcimer, and daf.

Dr. Henelito A. Sevilla, Jr will serve as master of ceremonies for the event. He is Assistant Professor and Assistant to the Dean for Administration and Public Affairs at the UP Asian Center.

For directions, please view this vicinity map and a Google Street View map. Inquiries may be sent to asiancenter@up.edu.ph.