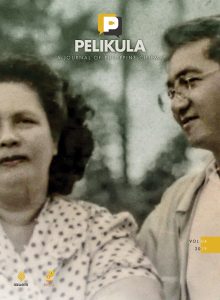 The first two volumes of Pelikula: A Journal of Philippine Cinema, published by the University
of the Philippines Film Institute (UPFI) with support from the National Commission for Culture
and the Arts, will be released online on December 18.

Pelikula is edited by Patrick F. Campos, a professor and currently the director of the UPFI. It
was revived in 2019 as part of a series of activities to commemorate the centennial of Philippine
cinema and Jose Nepomuceno’s Dalagang Bukid. The UPFI series, in collaboration with various
institutions, included such events as SANDAAN, an international conference that kicked off the
celebrations in 2017, the PELIKULA LEKTURA yearlong series, the EXPE Film Festival, and
INTERSEKSIYON, a multidisciplinary conference on literature, language, and film.

These images signify the journal’s project of chronicling the many facets of Philippine film
history and recuperating its lost histories. They also represent the journal’s goal of serving as a
platform for commenting on contemporary issues and debates on cinema and cinema’s
connection to society.

As Campos notes, “Pelikula aims to give space both for new writings and new writers.” Indeed,
the volumes carry the works of young writers and researchers from different parts of the
Philippines. At the same time, many of today’s active film writers, including foreign critics and
scholars, are present in the journal’s pages.

According to Campos, “Pelikula is envisioned as a primary resource material that documents
knowledge production in the field and encourages conversations on Philippine cinema’s
development. It broadly covers national and regional perspectives.”

The journal’s breadth can be gleaned from the two volumes’ nearly 100 articles. There are pieces
on classic and contemporary popular cinema, such as Bituing Walang Ningning, the movies of
Irene Emma Villamor, the Metro Manila Film Festival, and Duterte’s drug war onscreen. There
are essays on Eddie Garcia and Consuelo Osorio as well as John Torres and contemporary
women documentary filmmakers. There are articles on the film cultures in La Union, Calabarzon,
Pampanga, Bicol, Western Visayas, Cebu, Davao, and Zamboanga. And there is coverage on
movements in the film sector in the time of COVID-19.

The revitalized Pelikula returns 20 years after it was first published in 1999. The journal was
originally launched during the twilight years of the celluloid century, under the editorship of
Nicanor G. Tiongson. It was able to release three volumes that documented a crucial transition
period in the country’s cinema.

The two volumes will be available for free download at pelikulajournal.com on December 18.
For more information, follow UPFI at facebook.com/UPFIOfficialPage.