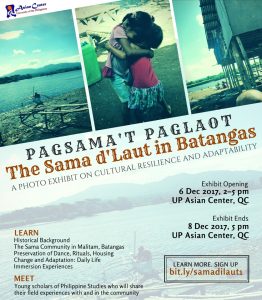 The exhibit, which depicts the lives and experiences of the Sama d’Laut community in Wawa, Batangas City, will be open until 5 p.m., 8 December 2017. The exhibit is free and open to the public

​.​
SIGN UP: YES, I WILL ATTEND THE EXHIBIT OPENING/DROP BY THE EXHIBIT

ABOUT THE PHOTO EXHIBIT: FEATURED TOPICS

A community of around 200 Bajau families, known for their sea-based way of life, has now settled in Wawa, Batangas City, Batangas. Originally from Basilan, they had to move out because of armed conflict in the 1970s. On 25 November 2017, graduate students taking up Philippine Studies (PS) 201 under Dr. Henelito Sevilla visited this community in order to:

1. Examine the economic, socio-cultural and political dimensions of the Sama d’Laut community;

2. Inquire how their displacement to areas far from their traditional homeland (or rather, homesea) changed their way of life and culture;

3. Analyze the possible influence of internal and external interactions with the community’s economic, socio-cultural and political institutions;

4. Help the community understand their connection to the larger Philippine society and the Asia-Pacific region;

5. Share and encourage the appreciation of the Sama d’Laut’s indigenous knowledge and culture to the wider public.

Highlighting the community’s cultural resilience, on the one hand, and their ability to adapt to their present environment, on the other, the photo exhibit addresses the five foregoing themes around the following topics:

The students brought books and school supplies, among others. And they will be around on 6 December during the exhibit opening to share their experiences in the field and engage questions from the audience.  They are taking Philippine Studies 201, an introductory graduate course which entails a “systematic analysis of the Philippines as a complex society within the context of developments in the Asia Pacific region.”

ABOUT THE SAMA D’LAUT COMMUNITY

T​he Sama d’Laut are among the numerous ethnic groups of Maritime Southeast Asia. But decades of conflict amidst a rapidly globalizing world suffering from colossal environmental disaster have forced some to drop their seaborne lifestyle. Forcefully displaced, some of the Sama d’Laut now live in urban or other coastal areas where they have to face the challenge of integration within land-locked communities.

If you are planning to come with/as a big group (a class or delegation), please inform us the number of participants at   asiancenter@up.edu.ph. It would also be best if their names could be registered online or if you could send us a list of their names.