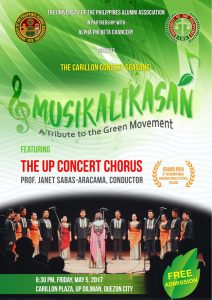 The UP Alumni Association (UPAA), in partnership with the Alpha Phi Beta Chancery, is presenting the 5th UPAA Carillon Concert – Musikalikasan – featuring the internationally acclaimed UP Concert Chorus, on Friday, May 5, 2017, 6:30 p.m., at the UP Carillon Plaza, UP Diliman, Quezon City.

The UP Concert Chorus (“Korus”) took home the Grand Prix at the 6th International Krakow Choir Festival in Poland in June 2015. In 2012, they won First Prize in the Folk Category at the Festival Internacional de Musica de Cantonigros in Catalonia, Spain, and the Gold Diploma and Audience Prize at the 9thCantemus International Festival in Hungary. For all these accomplishments, Korus was accorded the 2012 Lifetime Achievement Award by the Aliw Awards Foundation; PARI Awit Achievement Award, and the 2013 and 2016 Ani ng Dangal Award by the NCCA. Musikalikasan, a tribute to the Green Movement, will be their farewell performance before embarking on yet another international concert tour.

Staged free for the UP Community and all music-lovers, the UPAA Carillon Concert Series, which features award-winning UP artists, aims to heighten awareness for the UP Carillon and its maintenance and conservation needs. Its ringing “voice” constantly resounds to remind us of our responsibility.

We look forward to the pleasure of your company at the Carillon Plaza!