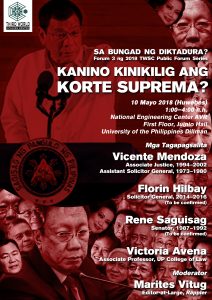 Libre ito at bukas sa publiko (RSVP).
Click here to see the program.
About the forum:
The Solicitor General is like a persistent suitor of the Supreme Court, an amorous houseguest that seemingly never leaves. Thus, the current SolGen, Jose Calida, has taken to calling himself the “sixteenth justice” of the Supreme Court.Unsatisfied, Calida now demands that if he fails to win his sweetheart’s hand, he’ll have her thrown out in the streets. That is what can happen if Calida’s quo warranto petition to have Chief Justice Maria Lourdes Sereno ejected from the Court succeeds. If that happens, we will trace the origins of a doctrine that can cause the removal of all government officials—even those whom the Constitution states can only be removed via impeachment—to Calida.

Legal experts have stated that our Supreme Court has clarified—if not actually expanded—the extent of the powers of the president under our previous and current constitutions. What is usually not highlighted in such explanations is the role of the office of the Solicitor General. During the dictatorship of Ferdinand Marcos, Lansang v. Garcia was promulgated. That decision reinforced the ability of the Supreme Court to look into the legality of orders by the president, but also stated that the president is in the best position to determine if there is evidence for the reasonable use of his police powers. Such reasoning came from the office of the SolGen, then headed by Felix Antonio—which, in the context of a dictatorship, represented more the interests of Marcos than those of the citizenry.

The sameness in thinking, if not collusion, between the Court and the SolGen does happen. During the Corazon Aquino administration, SolGen Francisco Chavez succeeded in convincing the Court that the president has the power to prevent the immediate repatriation of the remains of Ferdinand Marcos from Hawaii. Recently, Calida has also enjoyed such wins; the Court found meritorious his defense of the legality of President Rodrigo Duterte’s order to have Marcos’s remains buried in the Libingan ng mga Bayani. In two distinct cases related to a single corpse, both Chavez and Calida resurrected the “political question” doctrine that the Court—and the most prominent Marcos-era SolGen, Estelito Mendoza—was fond of during the Marcos dictatorship.

Such are the moves that the Court and the SolGen make under a ratified constitution; what if there isn’t one? We have already experienced being under what some have been clamoring for, a “RevGov” or a revolutionary government. Corazon Aquino established one after EDSA. A month after she became president, using the dictatorial powers she had at the time, Aquino issued a temporary “Freedom Constitution,” which junked several sections of the 1973 Constitution. A few months after a government was formed under the Freedom Constitution, several petitions questioning the legitimacy of the Aquino administration had to be dealt with by the Supreme Court. These petitions were dismissed in a minute resolution, which stated that the legitimacy of Aquino government was not a justiciable matter.

This forum will focus on the possible responses of the Supreme Court if Duterte forms a RevGov. Or, barring that, if Duterte arrogated unto himself unchecked executive powers. If the current Constitution will be disposed of to make Duterte a Supreme Leader, what “fundamental law” will be said to prevail over the country, which the Court will follow—if there will still be a Supreme Court? If, like Corazon Aquino, Duterte issues a Freedom Constitution, can the Supreme Court void it? Will judicial review still exist? If Duterte will not declare a RevGov, can he still become dictator-like—a harsh ruler who is able to make laws or law-like proclamations—that, with a meeting of the minds of the SolGen and the Supreme Court, is not violative of the Constitution?