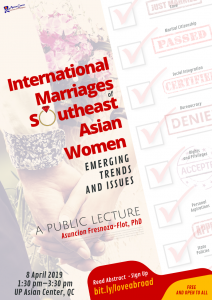 The UP Asian Center will be organizing a public lecture, International Marriages of Southeast Asian Women: Emerging Trends and Issues, on 8 April 2019, 1:30 pm to 3:30 pm, at the Asian Center, University of the Philippines Diliman, Quezon City. The lecture is free and open to the public, but seating is first-come, first-served. Walk-ins are welcome, but participants are encouraged to sign up

International marriages involving Southeast Asian women have been on the rise, not only within the Asian region but also in Europe and North America. This phenomenon has been an object of control and regulations in many states through their “marital citizenship” regime characterised by the granting of a legal status to a migrant by virtue of his/her marriage to an insider citizen. This regime determines the migrant partner’s access to a set of rights and privileges in their receiving country as well as to citizenship acquisition, which affects their social incorporation, fashions their everyday life and shapes their aspirations. Based on the co-edited volume International Marriages and Marital Citizenship. Southeast Asian Women on the Move (Routledge 2017), this presentation unveils at the macro level emerging trends and issues concerning international marriages from and within Southeast Asia. Though the lens of “marital citizenship” combined with a transnational approach, it examines at the micro level the case of Thai migrant women in couple with Belgian men in Belgium, and illuminates how they simultaneously straddle the marital citizenship regime of Thailand and that of Belgium to access certain socio-economic advantages “here” and “there.”

Asuncion Fresnoza-Flot is tenured associate researcher of the Belgian National Fund for Scientific Research (FNRS) and senior lecturer (maître d’enseignement) at the Laboratory of Anthropology of Contemporary Worlds (LAMC) at the Université libre de Bruxelles (ULB) in Belgium. Her on-going research programme focuses on the contextual mobility of Belgian-Asian couples in Belgium and in Asia. This project received support from the FNRS and the House of Human Sciences of ULB, and recently obtained a “Concerted Research Action (ARC) Consolidation” funding from the Wallonia-Brussels Federation in Belgium. In terms of research outputs, Asuncion has published widely in French and in English. Her recent works include the co-edited special issue “Transnational perspectives on intersecting experiences: gender, social class and generation among Southeast Asian migrants and their families” at the Journal of Ethnic and Migration Studies (2017) and the co-edited volume International Marriages and Marital Citizenship. Southeast Asian Women on the Move (Routledge 2017).