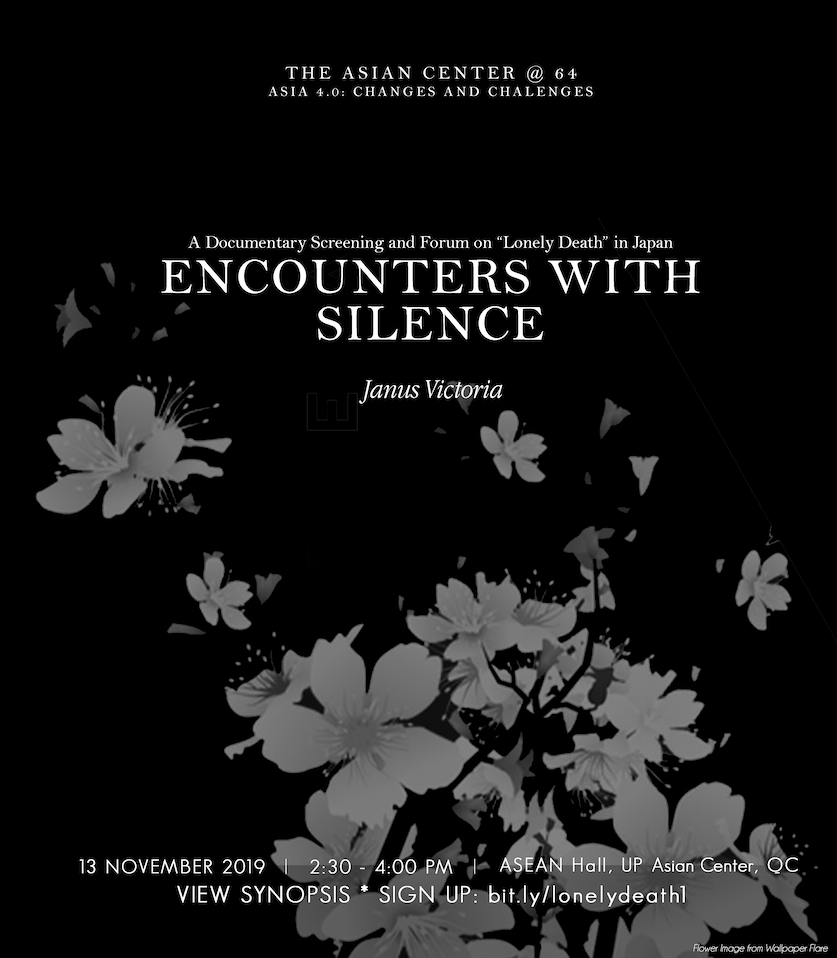 The UP Asian Center will hold a free screening of the documentary, “Encounters with Silence,” on 13 November 2019, 2:30–4 pm, at the ASEAN Hall, UP Asian Center, QC. A discussion on the film’s topic, the “lonely death” in Japan, will follow the screening. The event is free and open to the public. Seating is first come, first served. Walk-ins are welcome, but participants are encouraged to sign up.

In a country with a large population of elderly and middle-aged people living in isolation in small apartments without friends or family to rely on, many die alone and unnoticed. Their bodies are discovered by neighbors several weeks, or even months, after. The lonely death, or kodokushi, has become hauntingly common in Japan. Still it remains a sensitive subject and is rarely discussed. Filmmaker Janus Victoria confronts the silence on the subject through encounters with a man who cleans the apartments of those who die alone, a photographer who documents the aftermath of kodokushi, an elderly woman fiercely protective of her independence even in old age, and an artist who sings to pierce the stillness around her. By examining the quiet and lonely death, Encounters with Silence becomes a meditation on life itself. Encounters with Silence premiered in competition under the Asian Perspective category of the 2017 DMZ International Documentary Film Festival in South Korea.

The context of film topic and the production process of the documentary will be discussed by the filmmaker after the screening. Q&A will follow afterwards.

Janus Victoria is a filmmaker of narrative features and documentaries. She produced Encounters with Silence during her fellowship at the Asia Center of The Japan Foundation. She is currently taking MA Asian Studies, major in Japan Studies at the UP Asian Center.

This event is part of the Asian Center’s 64th anniversary celebrations. View full list activities and sign up. Professor Sonoda’s lecture is one of four activities scheduled on 13 November:

• How Do Elite University Students in ASEAN Look at their Asian Neighbors? | A Lecture

• South Sulawesi, Indonesia as a Field of Historical Study | A Public Lecture