Bulan at Karawitan (Moon and Music) 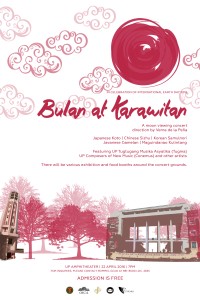 An Asian music concert entitled “Bulan at Karawitan” will be held under the light of the full moon on April 22, 7 PM, at the University Amphitheater.

The concert is part of the “Diliman Earth Fair,” an outdoor festival in celebration of Earth Day 2016, organized by the UP College of Music (CMu) Department of Musicology headed by Dr. Verne de la Peña, in association with the Office for Initiatives in Culture and the Arts.

Inspired by the moon viewing ceremonies practiced in Japan and other parts of Asia, Bulan at Karawitan will feature UP Tugtugang Musika Asyatika (UP Tugma), Auit Vocal Ensemble, and works by UP Composers of New Music (CONEMUS).

Led by Prof. Mary Katherine Trangco, the Auit Vocal Ensemble and the UP CONEMUS are student organizations with a thrust towards 21st century contemporary art music.

The Auit Vocal Ensemble is the only choral group that exclusively sings music from this genre. They have premiered many works and recently performed at the choral concert of the Likha-Likas: Asian Composers League International Festival in November 2015.

The UP CONEMUS, on the other hand, is a group set to advance “New Music” within and beyond the confines of the Academe through audio CD productions, workshops, symposia, outreach concerts, and lectures of a primarily academic nature.

The performing arm of the Musicology Department, the UP Tugma aims to develop a more conscious audience base with a deeper understanding and interest for Asian musical traditions, and to raise the banner of Philippine music in the international community. Constantly invited to different music festivals abroad since 2009, UP Tugma regularly conducts concerts, recitals, workshops, educational discussions, and field exposures. Founded in 2007 and led by Dr. de la Peña, UP Tugma will be performing with instruments such as the Maguindanao kulintang, Korean samulnori, Japanese koto, Chinese sizhu and Javanese gamelan.

The Diliman Earth Fair also features various booths with food, arts and crafts, and other exhibits and will start at 3PM.  Entrance to the fair and concert is free.