ARTISTS LAUNCH ALBUM IN SUPPORT FOR THE RESUMPTION OF PEACE TALKS 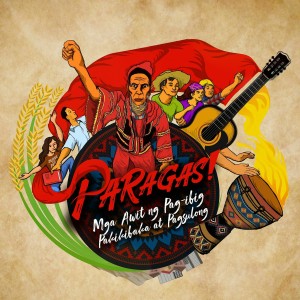 Two days before the inauguration of the 16th President of the Government of the Philippines, progressive artists come together to pose a challenge to President-elect Rodrigo Duterte by launching their newest album dubbed PARAGAS! Mga Awit ng Pag-ibig, Pakikibaka at Pagsulong.

Paragas, a Manobo term that means padayon or move forward, is a compilation of 12 original songs composed by a Davaoeño singer-songwriter and coordinator of Save Our Schools in the University of the Philippines Diliman, Edgie Francis Balangauan Uyanguren. It features dynamic collaborations with artists like Dino Concepcion (former vocalist of Brownman Revival), TUBAW Music Collective, Onie Badiang, Dodjie Fernandez, Karl Ramirez, UP Professor Roselle Pineda, and Musikang Bayan.

The roster of songs in the album serves as the core message of progressive artists and cultural workers to the incoming Duterte administration whose battle cry for change won the hearts of millions of Filipinos. There are high expectations so the challenge now is to articulate the struggles and aspirations of the masses who seek justice, accountability, and peace.

“Yes, we need change and we have long called for real change amidst relentless impunity and corruption! The Filipino people deserve meaningful, lasting, and genuine change that will uphold, defend, and respect their rights and welfare,” PARAGAS organizers stressed.

Selected cabinet members of the Duterte administration who are from the Makabayan bloc such as incoming DSWD Secretary Dr. Judy Taguiwalo and incoming DAR Secretary Rafael Mariano confirmed their attendance. They will be given copies of the album so that the call for the resumption of peace talks and accountability will be relayed to President-elect Duterte.

The album also pays tribute to the farmers, workers, migrants, indigenous peoples, women, youth, and political prisoners as they continue to struggle for national democracy and human rights.

Karapatan Secretary General Cristina Palabay expressed that one of the songs in the album entitled “Karapatan” exhorts its listeners to respect and fight for their rights, its tune discordant with the woes it depicts but consistent with its message that the struggle for people’s rights is also a meaningful, fulfilling and enjoyable struggle.

The album launch will be on June 28, 2016 8:00 p.m. at My Bro’s Mustache Folk Bar in Scout Tuazon corner Scout Madriñan Streets, Brgy South Triangle, Quezon City. Organizers pledged to deliver the net proceeds of the album to the ongoing campaign of the Save Our Schools for the Lumad communities that are militarized and violated.###