‘ANA Yose: Rakugo in English’ comes to UP Diliman 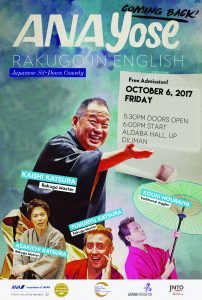 Organized by All Nippon Airways (ANA) and in cooperation with UP Center for International Studies (UPCIS), The Japan Foundation, Manila (JFM) and Japan National Tourism Organization (JNTO), we bring back Rakugo in English, a Japanese Sit-down Comedy with special Japanese artists to enthrall Philippine audience. On October 6, 2017 (Friday), there will be a special performance at the Aldaba Hall, University Theater Complex, Magsaysay Avenue, UP Campus, Diliman, Quezon City.

Rakugo is a Japanese comic storytelling art that has been used as entertainment for over 400 years and is still widely popular today, staged at “yose”, which are specialized theatres for Rakugo. The artist speaks to the imagination, and single-handedly creates the hilarious side of tradition of Japan.