A Lecture on Post-Independence Sri Lanka 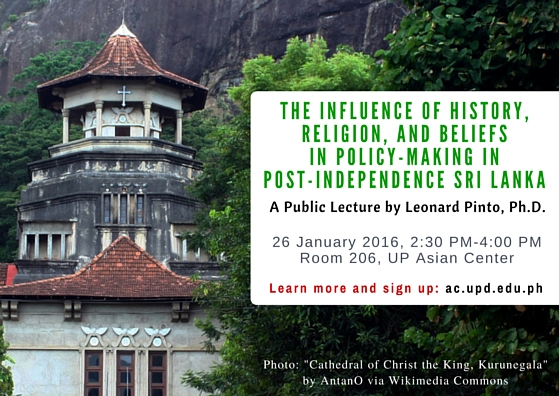 The Influence of History, Religion, and Beliefs on Policy-Making in Post-Independence Sri Lanka

The Asian Center, University of the Philippines Diliman will be hosting a public lecture, “The Influence of History, Religion, and Beliefs on Policy-Making in Post-Independence Sri Lanka,” on Tuesday, 26 January 2016, 2:30 p.m. to 4:00 p.m. at Room 206, 2F, Hall of Wisdom, GT-Toyota Asian Cultural Center, Asian Center, University of the Philippines Diliman. The lecture is free and open to the public; seating is available on a first-come, first-served basis.

Below is an abstract of Dr. Pinto’s lecture:

Sri Lanka gained independence from the British in 1948. The country was under the British for 152 years, under the Dutch for 138 years, and under the Portuguese for 153 since 1505. Tamil and Sinhalese political leaders jointly worked to obtain independence from the British. However, after independence, the national identity changed to Buddhist-Sinhalese identity. The content of Buddhist chronicles, and their myths and legends were used to justify the ownership of Sri Lanka by the Buddhist- Sinhalese majority. Policies were developed to nationalise schools, make Sinhala the national language, and change the criteria for State University admissions. These policies disadvantaged the Christian (7 percent) and Tamil (15 percent) minorities, while Muslims (9.6 percent) took advantage of the situation. Policies that were directed with emotions, rather than with reason, resulted in the rise of Tamil terrorist groups that fought for independence for 26 years, leading to the loss of over 100,00 lives. After winning the war, the president was symbolised as a Sinhalese monarch, like the Sinhalese kings of the past who once defeated their Tamil counterparts.  Thus, triumphalism and corruption, instead of reconciliation, prevailed until the change in government in 2015.

This lecture is based on Dr. Leonard Pinto’s book, “Being a Christian in Sri Lanka: Historical, Political, Social, and Religious Considerations,” which was published by Balboa Press in July 2015.

Dr. Pinto has a Ph.D. in Zoology from the University of the Philippines Diliman. From 1980 to 1985, he taught at De La Salle University’s biology department and was the Director of the Matuod Marine Research Station in Batangas province, Philippines. Apart from his academic career, which saw him teach in universities in Sri Lanka and Australia, he also did environmental planning and impact assessments in Australia, and has nineteen years’ industrial experience working at the Sydney Water and Australian Water Technologies. His research publications include articles on Philippine ecology, some of which were published in the Philippine Journal of Science and the Philippine Journal of Veterinary Medicine.

Photo: Poster promoting public lecture. Click to enlarge. The photo is of the “Cathedral of Christ the King” in Kurunegala. Taken by user, AntanO, uploaded at Wikimedia Commons, and licensed under CC-BY-SA 4.0.