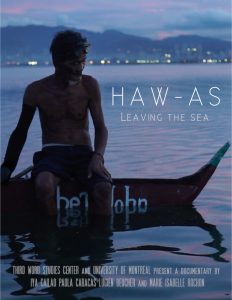 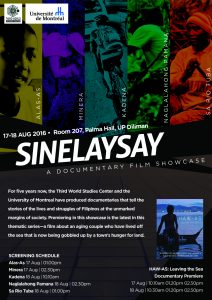 The Third World Studies Center (TWSC) of the College of Social Sciences and Philosophy, UP Diliman, in partnership with the Department of Political Science of Université de Montréal is holding a free public event, “Sinelaysay: A Documentary Film Showcase” from 17-18 August 2016 at Room 207, Palma Hall (PH207), University of the Philippines Diliman. Below is a brief description of the event:

For five years now, the Third World Studies Center and the University of Montreal have produced documentaries that tell the stories of the lives and struggles of Filipinos at the unmarked margins of society. This showcase features films focusing on such people against the backdrop of access to land and its uncertain, if not diminishing resources—a community that lives on the back of an active volcano for want of a liveable space, women mining the dregs of what was once a gold country, a worker living in a packed urban space and cycling through poverty and the deadly streets of a metropolis, a tribal leader bequeathing to his son a future that is about to vanish, and of families whose life stories swirl and eddy with the sludge of the mines on a river. Premiering in this showcase is the latest in this thematic series—Haw-as: Leaving the Sea, a film about an aging couple who have lived off the sea that is now being gobbled up by a town’s hunger for land.